skip to main | skip to sidebar

There she sat, on a stool not six feet from me, in the University of Florida infirmary: The delicious Victoria Principal, a 22-year-old vision from heaven--from Hollywood, actually--in a white, tight-clinging see-through blouse and mini-skirt.

Did I mention I was in my underwear?

It was the spring of 1972--my sophomore year at UF--and I was making my film debut, playing one of 20 army draftees (stripped to our skivvies) undergoing a pre-induction physical in The Naked Ape, a major motion picture being filmed on campus.

As we waited for the next scene, Ms. Principal crossed her legs and swept a wisp of hair from her eyes. When she finally spoke, her words etched indelibly into my id: "The camera is the perfect lover," she purred. "It gives to you exactly what you give to it." We swooned.

The director, Donald Driver--a wispy, wiry, nervous sort--called, "Places everyone," and reminded us once again of the Extra's Holy Commandment: "Whatever you do, DO NOT LOOK AT THE CAMERA!"

We took our places. As extras we were simply human scenery, of course. Every so often, Driver would catch one of us peering into the camera's eye. "Cut!" he'd bark, then chew out the offender--"the camera does not exist!" he'd howl--and we'd run through yet another take.

No one knew it at the time, but Driver's Naked Ape was destined to become one of Hollywood's legendary Lost Movies. After a short run following its 1973 release, the film mysteriously vanished; today, over a quarter-century later, it remains unseen. What happened?

From book to film

The movie version of the 1967 best-seller The Naked Ape was almost never filmed at all.

Hollywood producer Zev Bufman thought otherwise. He flew to Morris' home on the Mediterranean isle of Malta and launched into his pitch. Morris interrupted. "Anyone who feels passionately enough to travel halfway around the world should have it," the author told him. "It's yours."

Signing Principal was a coup. The former Miss Miami's rise to Hollywood sex-goddess was swift: Her 1972 film debut was opposite Paul Newman in Life and Times of Judge Roy Bean. (Principal's Playboy contract granted her the lead in Naked Ape provided she would pose for one of the mag's naughty pictorials. A six-page spread displaying Principal's earthly delights appears in Playboy's Sept.'73 issue, timed to the release of the movie).

Next to sign was Johnny Crawford, former original mousekateer and child star of TV's late-1950s series The Rifleman, as Principal's love interest. For Naked Ape, Crawford would play a college student facing the draft and a stint in Viet Nam; Principal would play the babe in Crawford's "Sexual Behavior" class.

Months before shooting commenced, Bufman began searching for a campus location. He liked UF, he said, because of "its different types of architecture, as if it could be any college, in any part of the country." Bufman then mailed the screenplay to UF President Stephen O'Connell, who called the script "high caliber," and "worthy of filming at the university." In return, the state of Florida--eager to entice the Hollywood film industry--agreed to supply the production with limos and private planes.

Driver's 40-member production crew invaded campus on Monday, February 22. Ads were placed in the student-run newspaper, the Alligator: Auditions for extras would be held at the UF auditorium.

As it turned out, Driver was merely looking for warm bodies with enough sense not to stare into the camera lens. The selection process, in fact, appeared random. Volunteers lined the stage, and a nod from Driver meant you were "in." Nearly 200 students were selected at the princely salary of $15 a day.

Scenes were shot in the hub bookstore, infirmary, gymnasium, and classrooms at Peabody Hall. I was present when Crawford arrived for his first scene, shot outside the infirmary. When an extra complimented Crawford on his Hollywood-style lizard boots, the star looked stricken. His boots were totally out-of-character (de rigueur footwear on campus: sneakers or sandals). "Who wears a size ten?" Crawford asked. There on the infirmary steps, Crawford whipped out a $20 bill and bought an extra's beat-up high-tops. Our jaws went slack. $20! To dorm-dwellers with prepaid meal tickets, this was three month's living expenses. Welcome to big-time show-biz.

Campus filming took ten days. I was amazed to learn that Driver actually sat in a director's chair with his name across the back, and that "takes" actually began with a black-and-white slap-board. I paraded through the rest of my scenes with all the natural acting ability of a marionette.

The movie, released in August 1973, was ignored by the nation's critics, most of whom didn't even bother to unsnap their typewriter covers. Among major dailies, only the Los Angeles Times bothered to publish a review:

"Based on the evidence before us," wrote Times critic Charles Champlin, "those who said that Desmond Morris' Naked Ape couldn't be made into a movie were right." Champlin called the film, "achingly tasteless." Hef's first foray into feature films was a bomb--a 500-pound daisy-cutter, in fact.

How bad was Naked Ape? This bad: Three decades after its release, the movie is still unavailable to the public in any format whatsoever. To his eternal humiliation, Hef created the counterculture equivalent of Plan Nine from Outer Space--but by god this turkey wasn't going to wind up as some late-night art-house laughing stock.

The movie hasn't been seen since 1974. By now one has to assume the reels are locked away in a closet at Hef's place, crumbling inexorably into neat piles of acetate dust.

Recently, I contacted a leading internet source dealing in hard-to-find movies and inquired about the obscure object of my desire. "Naked Ape seems to have fallen off the ends of the earth," he told me. "You can't even find a bootleg copy. It's the film collector's Holy Grail."

I saw the movie only once, in the fall of 1973. I had graduated that spring and moved back home to Panama City. I checked newspaper movie ads each day, until finally...

My first tip-off that Naked Ape had tanked big-time was this: It was shown at a local drive-in, second-billed to a motorcycle flick--a second-rate drive-in throw-away.

I felt a jolt of adrenaline nonetheless. I was officially a movie actor--appearing, I liked to add, alongside my voluptous Vicky. But wait a second. That final moment I'm on screen--did you notice? Oh geez! I'm looking right into the camera! 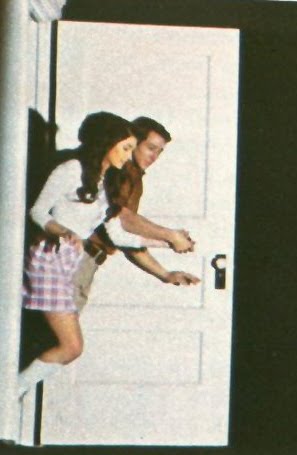 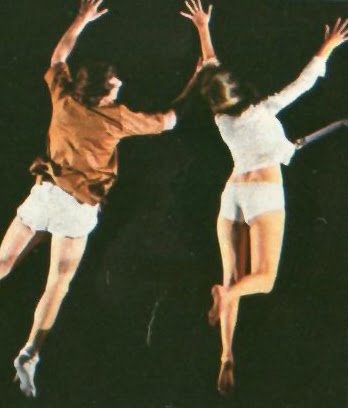 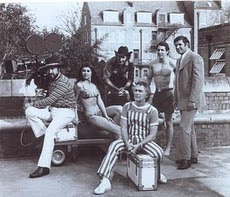 On UF campus: Director Driver (on trunk) with cast and crew. 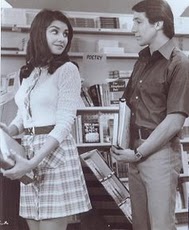 Principal and Crawford shoot a scene at the UF bookstore.

Animation stills from The Naked Ape. 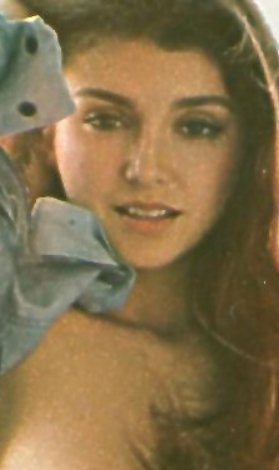 Victoria, from her Playboy spread. 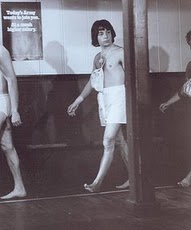